This is a tutorial of how to run a simple Kubernetes app on GKE (Google Container Engine).

Kubernetes is a container orchestration software that started at Google. Right now it's an open source project maintained by Cloud Native Computing Foundation.

So what's Kubernetes all about? Roughly, it's about managing a cluster (a set of machines) on which we have containers running.

Well, that's a question that probably has a lot of answers, but containers are very lightweight virtual machines more or less. The technology under them is different than virtual machines though. We can orchestrate a set of VMs, but containers are much easier to work with. For example I have one VM running on my MacBook - it eats a lot of memory, it's managed by VirtualBox, it has a lot of stuff installed on it. I can't imagine having to run a bunch of these. Containers though, they're much easier to setup (you just write a text file that describes them - the Dockerfile) and much more lightweight. Their memory footprint can be pretty low. Containers can run on different OSs, some of which are very lightweight. Ok, enough about containers - back to Kubernetes.

What's in a cluster?

I mentioned clusters. But what's a cluster. A cluster has a set of nodes (think computers) on which we have pods, where each pod is a unit that contains several containers. That's the basic structure.

Alright, let's roll our sleeves. Google has its own Quickstart tutorial, but what I don't like about it is that it doesn't describe how to create your own container and it doesn't talk about the Kubernetes dashboard. But a lot of the steps here you can see in Google's tutorial as well.

Install necessary tools and initialize them.

That's it. You can view your configuration:

Our container is going to be a node.js application that we'll build ourselves. I wanted to experiment with an app that takes a bit more memory, so here's how my code looks like:

We also need a Dockerfile:

In order to run a container on GKE, we need to upload it to Google Container Registry. Let's do it:

If you go to the Google Cloud Console and open the Google Container Registry, you'll see the container uploaded:

Now let's create a cluster that we'll be deploying our server to:

Congratulations! We have a cluster running.

A little segway. kubectl has a config that determines which cluster you're working with. You can switch between different clusters. Try it:

We're good here - our context is for the "mykube" cluster. The cluster is empty, we can verify it like this:

We have created a deployment that contains a pod. Let's see what pods we have now:

Nice, our container is getting spinned. We wait for a bit and we see:

We can now expose the container:

This will also take some time:

Now, the tedious part is over. Let's have some fun. We can monitor our cluster through the Kubernetes dashboard. For a reason unclear to me, this dashboard is not available on the Google website. You have to run a proxy to do it. Like this:

We can see the dashboard at localhost:8001/ui. It looks like this: 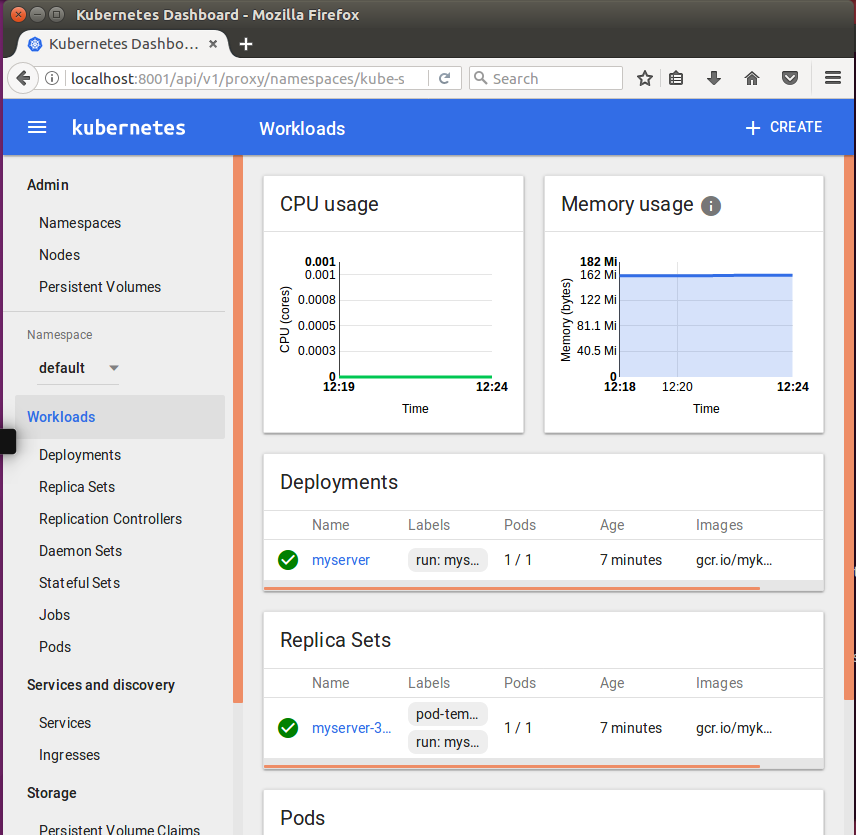 This dashboard is a lot of fun. You can dig into everything available in it. You can probably see everything it shows through kubectl as well, but it's easier to do it by using an UI.

Here's something else that's fun. Your cluster doesn't run on thin air. It runs on Google Compute Engine instances (I believe this is equivalent to AWS' EC2). In your cloud console, you can navigate to your instances and you can even SSH to an instance from the web UI (I wow-ed the first time I did this, much easier than setting up ssh access on AWS).

Our cluster has three nodes.

These are three GCE instances. Where is our pod running at?

It's running on gke-example-cluster-default-pool-2567fc65-g7lc. Now I can navigate to the web page for this instance and ssh to it. Here's a screenshot of how that looks like: 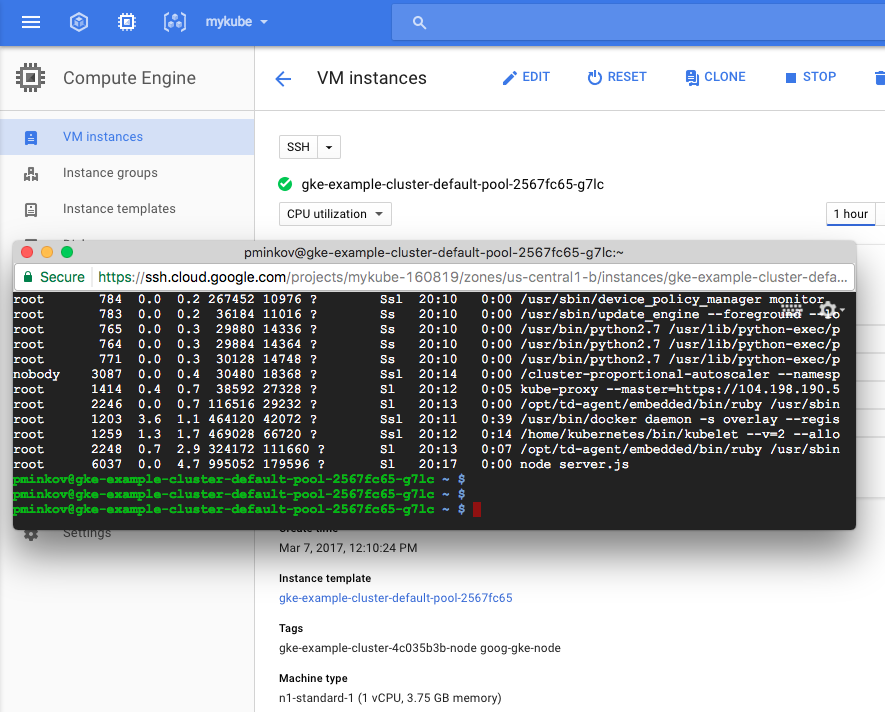 I ran ps aux --sort '%mem' to see which process takes most memory. Since my server uses a lot of memory, it's at the top. It's using 179MB of resident memory.

It's pretty nice that you're able to nagivate from a high level system like Kubernetes all the way down to ssh-ing to a machine that runs your containers. When you're ssh-ed you can execute docker ps to see what containers are running, run top to see what's going on on the machine and do all of the other systems debugging tasks that you can think of.

And finally, let's delete our cluster:

That's all for today - enjoy.